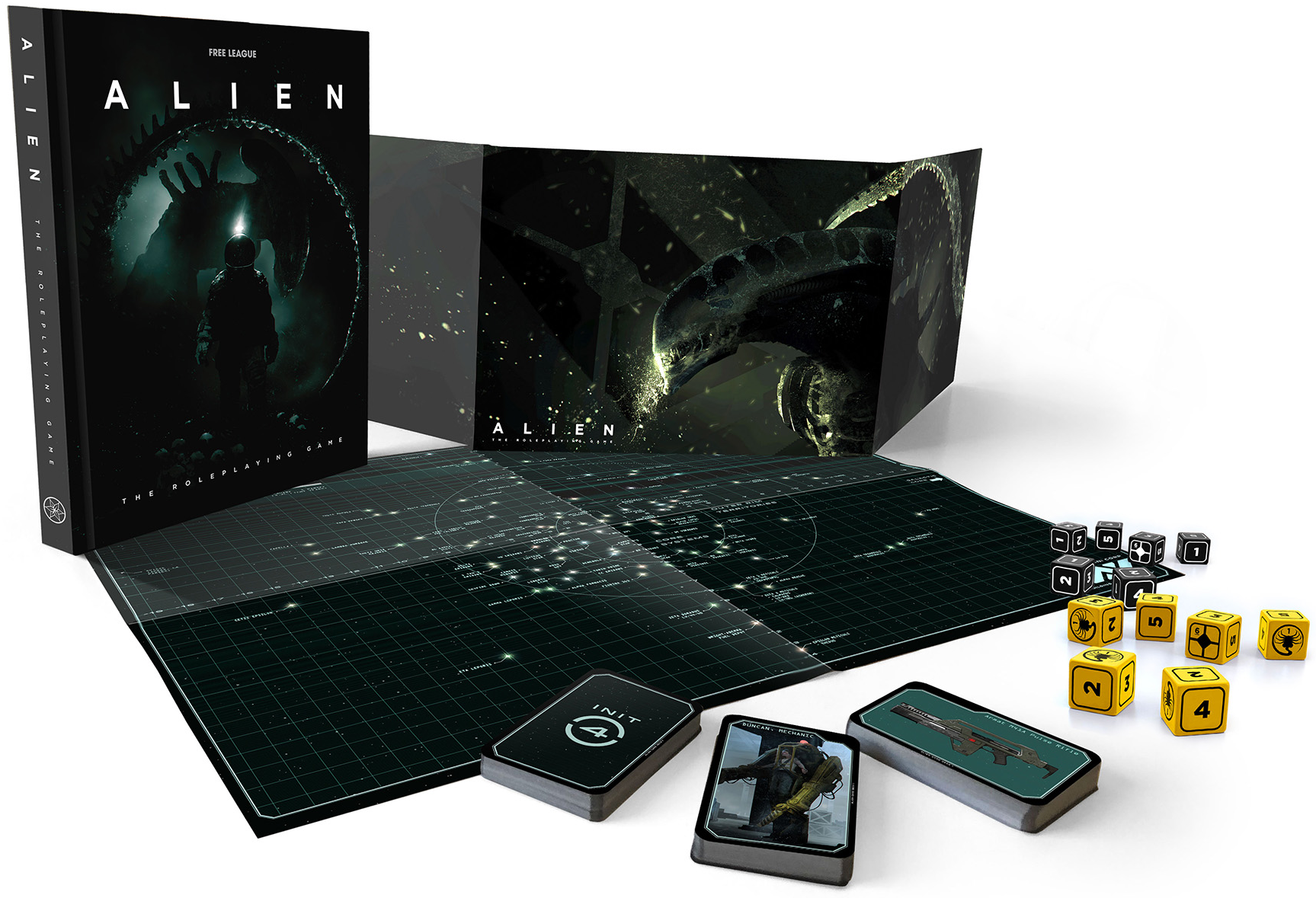 LOS ANGELES, CA (May 22, 2019) – On May 25, 1979, Alien first graced the silver screen. Forty years after the Alien franchise first inspired and shocked the world, Free League Publishing has a xenomorphic surprise of their own in store. Quite literally. Last month on Alien Day (4/26), Free League and 20th Century Fox Consumer Products announced their upcoming tabletop RPG series set within the Alien universe, which is set to release this holiday season. Yet for fans eager to explore that universe for themselves, they don’t need to wait any longer.

In celebration of the official 40th Anniversary this Saturday (May 25, 2019), Free League will offer a meaty 168-page Cinematic Starter Kit for their highly-anticipated Alien RPG – debuting their first Cinematic module Chariot of the Gods written by Alien RPG setting writer and sci-fi novelist Andrew E.C. Gaska – as a complimentary bonus gift for anyone who pre-orders the Alien RPG Core Rulebook at alien-rpg.com. The Cinematic Starter Kit will be available for download as soon as the pre-order purchase is confirmed.

Based upon Free League’s award-winning Year Zero game engine, the full Alien RPG Core Rulebook contains 300+ pages of mythology, artwork, and custom mechanics for open-world campaigns and deep, diverse space explorations on the Frontier. While Campaign Mode provides the tools for long-term gameplay, Cinematic Mode challenges players to start and complete an accessible, authentic tabletop RPG experience in one game session with no prior preparation necessary. A streamlined version of the Year Zero engine, Cinematics deliver only the most crucial game rules for each scenario with pre-generated characters, stories, and challenges – capturing the intense drama of an Alien film.

Free League has big plans for Alien and their new Cinematic mode, which is why they’re sharing the Starter Kit months ahead of the Core Rulebook.

“We’re trying something new and we want to know what people think,” says Free League co-founder and Alien RPG game director Tomas Härenstam. “In fact, anyone who pre-orders the Core Rulebook will receive exclusive access to our development process with opportunities to provide feedback and earn a play-tester credit in the final publication.”

The Starter Kit isn’t the last Cinematic module that fans can expect from Free League. “Chariot is the first in a trilogy of Cinematic modules from Andrew E.C. Gaska in the future,” shares Härenstam. Each Cinematic in the trilogy will explore a different style of gameplay, introducing a different perspective in the Alien universe and a different source of antagonism. Yet while each Cinematic module is designed as a stand-alone experience with new characters, settings, and challenges, the overarching narrative of the trilogy is connected – telling one complete, canonical story by the end.

“That’s what so liberating/challenging about designing and playing in Cinematic mode. You could be space truckers one session. Colonial Marines the next,” says Gaska. “The fun is figuring out how to work together, learn on the fly when the stakes are high, and try your best to survive the night. The constraints really make the whole experience feel more thrilling and terrifying. Like you’ve been dropped into your own Alien movie. And even if your character dies, the night is far from over for you as a player.”

As all characters aren’t likely to survive, Cinematics are engineered with death and replay value in mind, providing an ensemble cast of playable characters and branching narratives with multiple story paths and possible endings. “It’s rewarding to play and replay each Cinematic event, as you learn with experience, try new characters and creative solutions, and encounter new challenges over time,” shares Gaska.

Starting on May 25, Free League will accept pre-orders for the Alien tabletop RPG Core Rulebook and a variety of limited-edition 40th Anniversary goodies and gear exclusively at alien-rpg.com:

Fans can also customize their own package with individually priced add-ons.

The 40th Anniversary Edition of the Alien RPG Core Rulebook is exclusive to the Free League store and its 40th Anniversary Pre-Order Event, which begins 5/25/19 at 9am EST and ends 8/4/2019 at 11:59pm EST. Official retail solicitations for the Standard Edition will begin in July, but retailers are encouraged to contact Free League with any questions to welcome them into the 40th Anniversary fun as well.

ABOUT FREE LEAGUE PUBLISHING
Free League is a critically acclaimed Swedish publisher of speculative fiction, dedicated to publishing award-winning tabletop role-playing games, board games, and art books set in strange and wondrous worlds. Our best-selling RPG Tales from the Loop swept the 2017 ENnie Awards, winning five Gold ENnies for Best Setting, Best Writing, Best Art, Best Game, and Product of the Year. The game is inspired by a series of iconic art books published by Free League – Tales from the Loop, Things from the Flood, and The Electric State – exploring artist Simon Stålenhag’s original sci-fi universe soon to be realized in the upcoming TV series from Amazon Studios. Most recently, our fantasy RPG Forbidden Lands became the 3rd most successful RPG Kickstarter of 2017 and dubbed one of the best RPGs of 2018. Other tabletop work includes the post-apocalyptic RPG Mutant: Year Zero, the sci-fi RPG Coriolis – The Third Horizon, the fantasy RPG Symbaroum, and the Crusader Kings board game. To learn more, visit freeleaguepublishing.com.

ABOUT GENUINE ENTERTAINMENT
Genuine Entertainment is an award-winning producer and paladin in genre entertainment, specializing in strategic licensing for entertainment franchises and fandoms that demand quality and authenticity in equal measure. It’s our mission to build brands by building worlds and fan communities, making meaningful contributions with premium content and consumer products that extend brands into new markets and genuinely connect with fans across multiple categories. Recent collaborations include such genre greats as Alien, Altered Carbon, Avengers: Infinity War, Blade Runner 2049, Dune, Game of Thrones, and World of Darkness. To learn more, visit: www.genuineent.com.